The outcome of Super Bowl 54 hinges on San Francisco 49ers head coach Kyle Shanahan’s ability to go “All Gas, No Brakes” against the Kansas City Chiefs — but not necessarily how you think.

The San Francisco 49ers are currently in Miami preparing for Sunday’s Super Bowl LIV matchup against the Kansas City Chiefs. This week’s fanfare comes just three seasons into head coach Kyle Shanahan’s tenure with the Niners, and approximately three years after the Atlanta Falcons — with Shanahan as offensive coordinator — blew a 25-point second-half lead to the New England Patriots in Super Bowl LI.

Last week, Tim Kawakami of The Athletic interviewed Shanahan about “his role in the Falcons’ Super Bowl collapse.” Kawakami focused on a specific problematic play call, before stating, “Shanahan remains mostly aggressive as a play caller, but that’s not solely about picking pass plays. It’s about focusing in on a defense’s prime weakness and attacking that spot relentlessly.”

For reference, the Baltimore Ravens and the 49ers were the only two NFL teams with more rushing attempts than passing attempts during the regular season and playoffs.

After discussing the 49ers’ “massively run-heavy game” against the Green Bay Packers, Kawakami noted Shanahan was forced to call his first pass play in nearly a half of football, which proved to be successful.” Kawakami ended his point by stating:

“Lesson learned? Shanahan isn’t too interested in a direct correlation between the Super Bowl loss and some more conservative calls with a big lead these days, but he’s not ducking the potential cause and effect, either.” – Tim Kawakami

Correlation? Perhaps. But not causation or “cause and effect.” In fact, the opposite is true.

Shanahan must take a page out of his defensive coordinator Robert Saleh’s playbook on Sunday, and call plays using Saleh’s mantra of “All Gas, No Brakes.” In order for the gold, red and white confetti to shower Hard Rock Stadium at the end of Sunday’s contest, the 49ers’ head coach has to overcome two challenging hurdles: Shanahan needs to be aggressive on fourth downs and he needs to improve his lackluster clock management.

“All Gas, No Brakes” has nothing to do with San Francisco’s lack of passing attack in the 2020 NFL playoffs. Albeit unlikely against the high-powered Chiefs, if the 49ers can hold a considerable lead while exclusively running the ball, then have at it, Shanahan.

Just please keep your offense on the field on 4th-and-short.

Shanahan is one of the best — if not the best — play-designers in the NFL, and when he gets into a groove as a play-caller, he’s nearly unstoppable. However, when the Niners’ offense is forced into 4th-and-short situations, Shanahan is perhaps at his worst. Luckily for San Francisco, Shanahan’s deficiency in this area has yet to cost the 49ers any of their last three games, but as Houston Texans coach Bill O’Brien recently learned, when you have the opportunity to put a team like the Kansas City Chiefs away and fail to do so, the consequences are often dire.

In Week 17, the 49ers faced the Seattle Seahawks for the top seed in the NFC and home-field advantage throughout the playoffs. San Francisco dominated their NFC-West rivals during the first half of the contest, as they jumped out to a 10-point lead while holding the Seahawks to just 35 yards, as the two teams neared the end of the first half. When the 49ers reached a 4th-and-short situation inside the Seattle 7-yard line, Shanahan opted to kick a short field goal instead of aggressively going for the knockout blow, and the correct analytical decision.

San Francisco kicker Robbie Gould‘s short field goal extended the 49ers’ lead from a two-score lead to a two-score lead. With the gift of hope for a potential comeback, the Seahawks scored touchdowns on each of their second-half drives, until rookie linebacker Dre Greenlaw saved the day — and the Niners’ season — in the final seconds of the game:

That’s how you become legendary, @DreGreenlaw.

Shanahan’s decisions were more passive in the 49ers’ following game against the Minnesota Vikings, although the game eventually turned into a 17-point victory. The Niners kicked a short field goal on 4th-and-2 to extend their one-score lead to a one-score lead, and punted a pair of 4th-and-1 attempts, including one at midfield.

Against the Packers, Shanahan’s conservative decisions continued, turning a blowout victory into a far-too-close contest. The 49ers chose to punt twice on 4th-and-1, including from the Packers’ 39-yard line, and again failed to step on an opponents’ throat by instead kicking a field goal on 4th-and-2 from Green Bay’s 9-yard line, which extended San Francisco’s three-score lead to another three-score lead.

During Shanahan’s tenure in San Francisco, the 49ers have consistently left points on the field, and given opposing offenses extra opportunities to score in the closing minutes of first halves and at the end of games. The Niners’ clock management problems were on display again against the Packers. These ongoing failures have cost the team dearly in the past, and although they were of limited importance in the NFC Championship game, these issues must be rectified prior to facing a stronger team like the Kansas City Chiefs in Super Bowl 54.

Shanahan’s clock management was problematic during the second quarter and in the second half of the contest. Thanks to a botched snap by quarterback Aaron Rodgers, the 49ers took over at their 25-yard line with over five minutes remaining in the first half, and a three-score lead. One would expect San Francisco to use their four-minute offense to attempt to score while running time off the clock and forcing Rodgers from receiving the ball with timeouts to burn and ample time to drive the field.

Shanahan called the type of run-heavy drive expected from a four-minute offense. Unfortunately, the 49ers continuously failed — or forgot — to run the play clock down as they drove down the field: 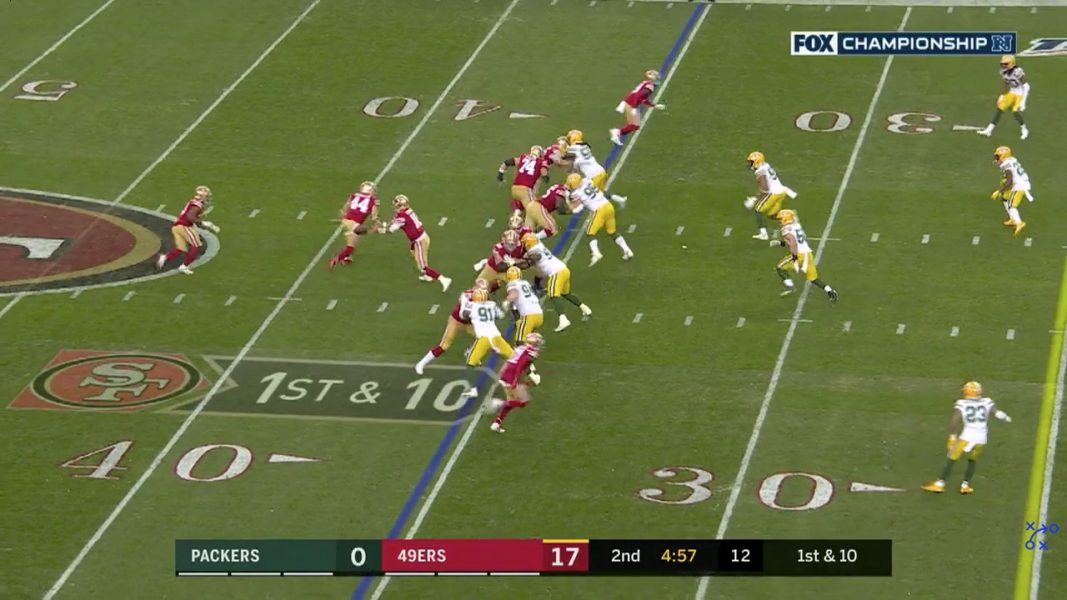 San Francisco unnecessarily left an extra 50 seconds on the clock on this drive, allowing the Packers to save all three of their timeouts for Rodgers’ two-minute drill — which didn’t last long thanks to cornerback Emmanuel Moseley. Although the clock management mistake worked out for the team in the end, the question remains: Does Shanahan realize he made a mistake? Because Kansas City quarterback Mahomes is the type of QB who makes opposing teams pay for their mistakes in these types of situations.

The above example of clock mismanagement is commonplace in the NFL, but the following example is a bit more confusing. The 49ers were in the midst of a potentially game-ending drive in the latter half of the third quarter, and they made no secret of their intentions of running out the clock, as they ran the ball on each play of the quarter. However, San Francisco forgot an integral aspect of running out the game clock — running out the play clock, as they chose to snap the ball with ample time as they drove down the field: 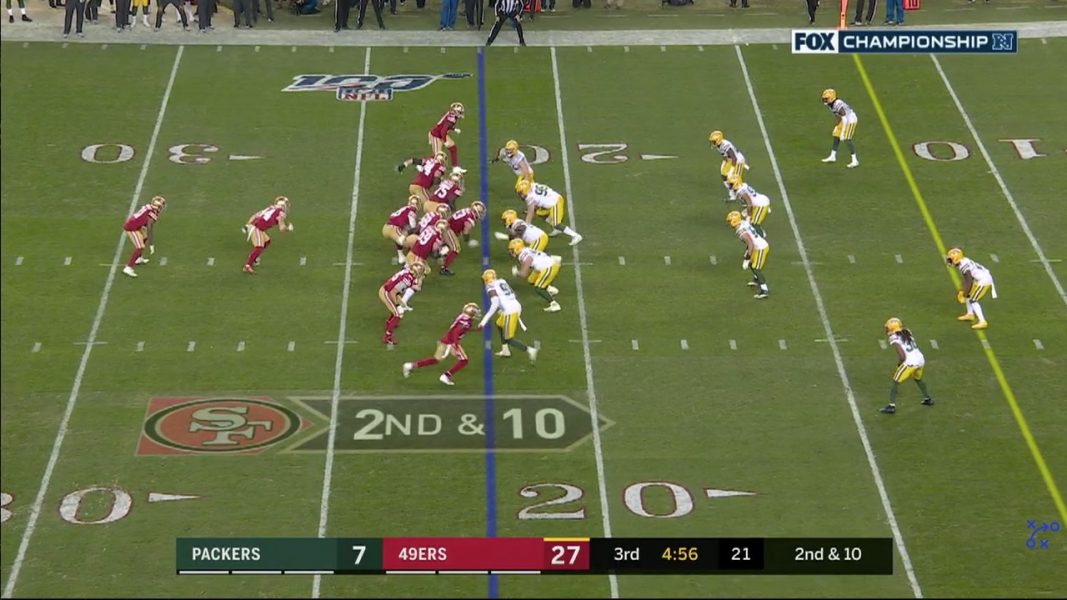 What makes this clock mismanagement example particularly confusing is in the fourth quarter, the team worked the play clock to near-perfection. Once the fourth quarter began, quarterback Jimmy Garoppolo and punter Mitch Wishnowsky ran the clock down to the wire, indicating they received specific instructions from their coaching staff: 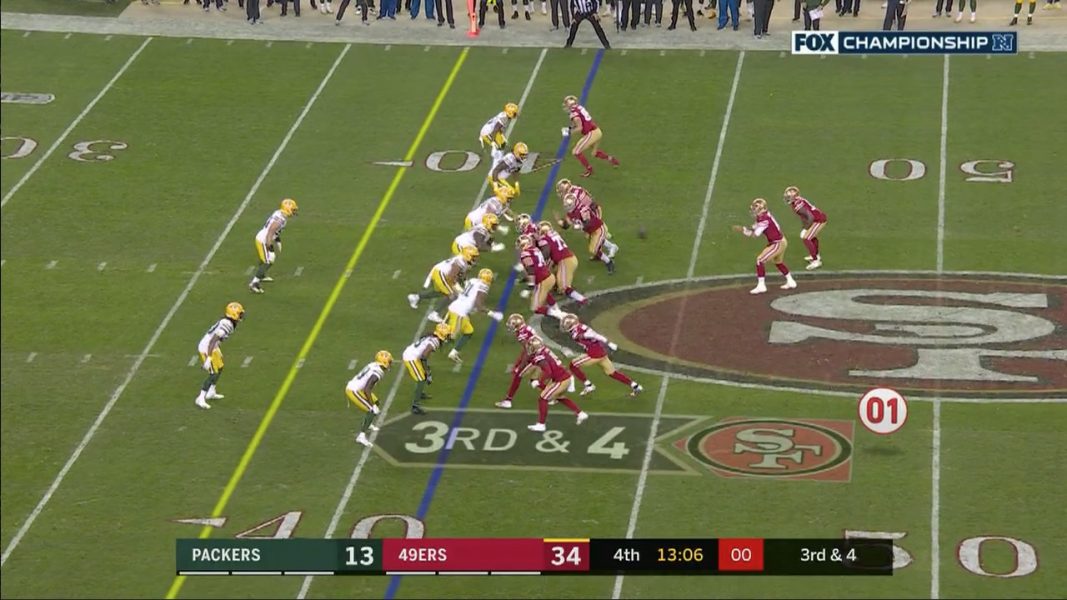 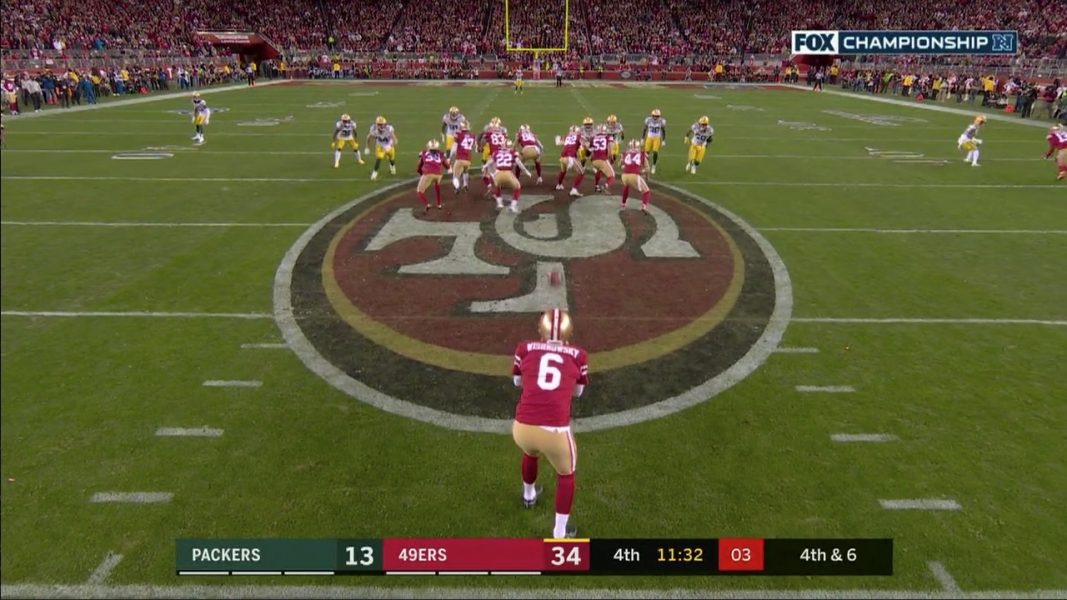 When you’re running out the clock, 21 seconds in the third quarter are worth 21 seconds in the fourth quarter — so why not use them appropriately? 49ers head coach Kyle Shanahan needs to be aggressive on fourth down, and he must fix his clock management problems if he expects to hoist the Vince Lombardi Trophy on Sunday night.

Nitpicky? Perhaps. But Super Bowl champions deal with these deficiencies now, not after they lose the big game due to easily fixable mishaps.

Food for thought. Will we look back on this team as being merely good, or one of the best of this storied franchise?

If Shanahan can go “All Gas, No Brakes,” the San Francisco 49ers will finally complete their Quest for Six this Sunday.

This Day in The Bay: Nedney Scores Every Point in 49ers Victory Over Buccaneers

WR Willie Snead has been promoted to the active roster; OL Blake Hance was waived

How will the 49ers use Christian McCaffrey in critical Rams matchup?

Vivid seats releases 49ers fan projection ahead of another matchup vs. Rams at SoFi

CB Jason Verrett could take on limited role vs. Rams

Behind Enemy Lines: What’s up with the Rams?

49ers PREP Selects Dhiraj Gurung as Player of the Week 8

49ers PREP Selects Paul Perenon as Coach of the Week

Barrows: Jimmie Ward symbolic of a 49ers defense that’s suddenly out of step

This Day in The Bay: Washington Scores in Opening Kickoff vs. Falcons