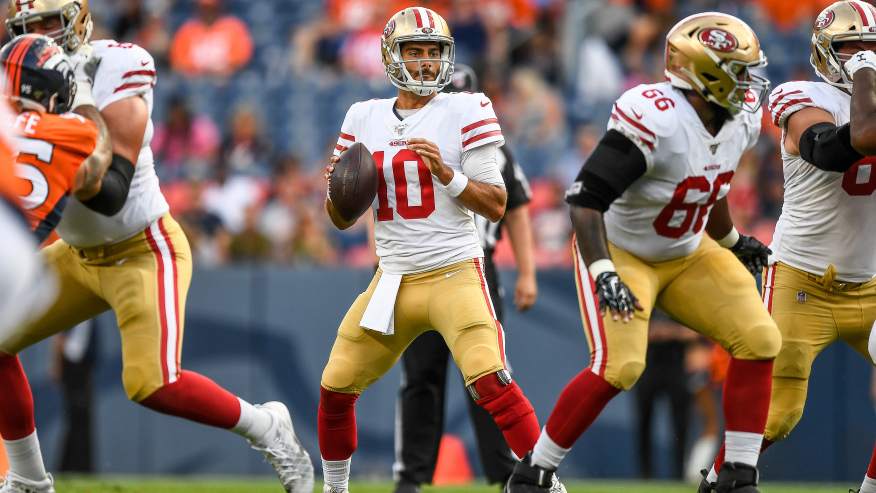 San Francisco 49ers quarterback Jimmy Garoppolo compiled a QB rating of zero against the Denver Broncos in Week 2 of the preseason. Here’s why his backup offensive linemen — particularly Ben Garland — shoulder much of the blame for Garoppolo’s rough return to action.

It’s not time to freak out, Niner fans — at least not yet.

San Francisco 49ers franchise quarterback Jimmy Garoppolo certainly didn’t look the part during his first game action since his knee injury in Week 3 of the 2018 NFL regular season. Garoppolo led the Niners on three short drives against the Denver Broncos in Monday’s preseason matchup, finishing with a stat line of one completion for zero yards and an interception on six pass attempts — good for a “perfect” quarterback rating of zero.

But when reviewing the game film, it is quickly apparent Garoppolo wasn’t as bad as it first appeared. While we didn’t see Jimmy G, circa 2017 on Monday Night Football, we also didn’t observe a performance so poor that it warrants a quarterback controversy in San Francisco. Garoppolo didn’t exude confidence in the pocket, and he definitely appeared to be averse to contact, which is understandable given his surgically repaired knee and the pass-rushing prowess of Denver’s edge defenders.

However, the primary reason Garoppolo gets a pass for his poor preseason outing is the status of his interior offensive line, which is absent two returning starters: center Weston Richburg and right guard Michael Person. When asked about playing behind his makeshift line, Garoppolo responded, “I think those guys did a pretty good job up front. For the most part, it was a clean pocket. I only got hit like once maybe. For the most part, it was pretty good up front. I just personally have to be better.”

It was the right response from a starting quarterback and leader of the team, but only the final portion of his response was accurate. The 49ers’ two replacement linemen — 2018 undrafted free-agent Najee Toran, and particularly journeyman guard-turned-center Ben Garland — and their related communication failures were responsible for Garoppolo’s horrid statistical output. Toran is young and has much to learn, and Garland is inexperienced at his new position after logging a total of 25 snaps at center since he joined the NFL in 2010 as a defensive lineman. So while both players could prove to be valuable depth pieces this season, Garoppolo will have a difficult time flourishing behind the inexperienced tandem — and particularly with Garland under center.

Garoppolo’s first pass attempt of the game comes on the 49ers’ third offensive play. After a pair of successful rushing attempts by Tevin Coleman, San Francisco faces a second-and-6 with the team nearing midfield. The 49ers line up in base personnel against the Broncos’ base 3-4 defensive front. After motioning Coleman out of the backfield, San Francisco has two wide receivers on the boundary side of the field and two running backs wide to the field side, along with an in-line tight end.

The Broncos are in one of head coach Vic Fangio’s split-field coverages, however, by pairing the wideouts on the short side of the field, the 49ers have an advantageous matchup between wide receiver Dante Pettis and EDGE Von Miller. Denver rushes four, with EDGE Bradley Chubb stunting up the middle, as nose tackle Shelby Harris quickly gives up after being double-teamed by Garland and Toran, who then allow the NT to disengage and watch Garoppolo’s eyes in an attempt to knock down any attempted pass. Toran looks to his right searching for work, while Garland steps away from Harris but is oblivious of Chubb running right past him toward the quarterback. Pettis wins quickly off the line and is wide open on the slant route. Due to the pending pressure, Garoppolo is forced to fire the ball over Harris’ head to his receiver, who has nothing but green grass in front of him. However, Harris, who has remained disengaged from any of the 49ers’ lineman, is free to simply jump up and swat down the pass attempt, ending San Francisco’s opportunity for a big gain.

If Toran kept attacking his man, or if Garland either stuck with Harris or helped on the stunt — essentially anything other than standing there and doing nothing — Pettis would have been off to the races on Garoppolo’s first pass attempt of the preseason, and the pundits would have been singing a different tune on Tuesday morning:

The following play is a great example of poor communication leading to unnecessary quarterback pressure, which results in an intercepted pass by Garoppolo. On this third-and-6, Denver wants to attack the right side of the 49ers’ line, which they overload with defensive end Derek Wolfe outside of right tackle Mike McGlinchey, Miller inside at a 3-technique, and Harris lined up directly over the center. Behind the defensive line, the Broncos are in 2-Man coverage with nickel personnel.

The 49ers have 11 personnel in an unbalanced formation toward the wide side of the field, with tight end Ross Dwelley in-line, and big slot Jordan Matthews tight to the formation. Garland struggles mightily with identifying the Mike linebacker on this play, which determines San Francisco’s pass protection scheme. First, he calls out No. 52, linebacker Justin Hollins, but is quickly corrected by Garoppolo that No. 47, inside linebacker Josey Jewell, is the Mike on this play.

Garoppolo then changes the protection, as he will eventually motion Dwelley to the opposite side of the formation to assist with the three Denver pass-rushers. Garland again points to Hollins, but Tomlinson immediately says something to Garland while pointing at Jewel. When Garoppolo motions Dwelley across the formation, Hollinsfollows and lines up well off the line-of-scrimmage, essentially ensuring that he isn’t the Mike. Yet Garland points to Hollins again right before the ball is snapped and the protection centers on Garland, far to the right of the formation, on the boundary side of the field.

With Dwelley initially staying in to block, the 49ers have five blockers for three pass rushers on the right side of the line, and tackle Joe Staley alone on an island on the left against Chubb and potentially two other defenders lined up within a yard of the line-of-scrimmage. Once the ball is snapped, Staley retreats while Garland looks immediately to his right — although no defender is there — allowing Harris to cross his face untouched as he works his way around Tomlinson. Staley gets caught a bit flat-footed as Jewel sprints outside toward the much speedier Breida, allowing Chubb to cut inside. If Jewel was properly “Miked” pre-snap, Tomlinson would be able to assist, since he and Garland would be double-teaming Harris, with Tomlinson ready to peel off to pick up a potential blitzer.

Instead, by misidentifying the Mike linebacker, Garland stands there with no one to block, while Tomlinson has his hands full with Harris. With Chubb untouched — although he did smack Tomlinson on the back as he ran behind him — barreling down on Garoppolo, the quarterback is forced to get rid of the ball immediately. What could have been a deep reception to Breida — if provided an additional second of protection — turns into an intercepted pass for Garoppolo. Meanwhile, Garland continues his search for a defender to block, and finally finds one after the ball has been thrown:

Not to pile on, but Garoppolo’s third pass of the game is again deflected by Harris, who bull-rushes Garland 7 yards back into Garoppolo’s lap from a three-man front — with Toran watching but offering no assistance. Harris’s well-timed jump tips the pass intended for wide receiver Marquise Goodwin, who had worked his way open on a dig route between the second and third level of Denver’s defense.

On third down, Garoppolo tosses an interceptable pass from a quickly-closing pocket, although it’s difficult to tell whether Chubb makes contact with Garoppolo’s arm before the ball is released. Matthews also slips out of his break, with Broncos cornerback De’Vante Bausby sitting on the underneath route, which he is unable to haul in as both he and Matthews attempt to make a play on the ball. Garoppolo would appreciate another shot on this play, as Pettis’ corner route would have been the better choice of the two routes from the smash concept.

Garoppolo’s fifth pass attempt is a decent throw by the quarterback, who is forced to get the ball out quickly as cornerback Chris Harris blitzes free off the edge. Garoppolo’s pass is a bit higher than he wants, and it arrives a little too quickly for tight end Kaden Smith, who is barely out of his break and unable to haul it in despite getting both hands on the ball.

On the following play and Garoppolo’s final pass of the game, 49ers head coach Kyle Shanahan dials up a screen pass to Breida out of 11 personnel. The Broncos counter with nickel personnel and what is most likely 2-Man coverage in front of a Double Wide-9 font, with Jewell again in man coverage against the speedster Breida.

As the ball is snapped, Staley lets Chubb take his favored inside route toward Garoppolo, as Tomlinson pushes Harris off on Garland so the guard can get out into the flat ahead of Jewel. But instead of either briefly engaging Harris or allowing the tackle to rush the QB freely, Garland pushes Harris toward Breida, and heads downfield toward Denver’s secondary. Although Tomlinson is able to get between Jewel and Breida, as soon as the RB catches the screen, he finds Harris bearing down on him. Breida stumbles just enough as he attempts to avoid Harris’ pursuit for Harris to dive at his feet and trip him up at the line-of-scrimmage for no gain.

Not only did Garland’s lack of discipline cost Breida and the 49ers a shot at a significant gain, but his downfield target — safety Trey Marshall — was able to stay on his feet despite Garland’s overzealous attempt to take out the defensive back:

Garoppolo didn’t have the best six passing plays of his career on Monday, but things would have gone a lot different for the 49ers’ signal-caller if he was working behind a competent and experienced offensive line. The Niners’ franchise QB has a lot of rust to knock off on Saturday, which will be his last opportunity to see the field before Week 1 of the 2019 NFL regular season. With Richburg expecting to be cleared for action next week, and Person aiming to play with the first-team offense on Saturday, the return of the San Francisco 49ers’ starting offensive linemen can’t get here soon enough for quarterback Jimmy Garoppolo.

This Day in The Bay: Nedney Scores Every Point in 49ers Victory Over Buccaneers

WR Willie Snead has been promoted to the active roster; OL Blake Hance was waived

How will the 49ers use Christian McCaffrey in critical Rams matchup?

Vivid seats releases 49ers fan projection ahead of another matchup vs. Rams at SoFi

CB Jason Verrett could take on limited role vs. Rams

Behind Enemy Lines: What’s up with the Rams?

49ers PREP Selects Dhiraj Gurung as Player of the Week 8

49ers PREP Selects Paul Perenon as Coach of the Week

Barrows: Jimmie Ward symbolic of a 49ers defense that’s suddenly out of step

This Day in The Bay: Washington Scores in Opening Kickoff vs. Falcons