In our latest series of 49ers Film Room, we break down the “Wide Nine” technique and its effect on the San Francisco 49ers’ 2019 defense, including how Nick Bosa and Dee Ford fit into the Niners’ new scheme.

We begin our 49ers Film Room series on the wide-9 technique by reviewing the basics of the defensive alignment, and identifying when 49ers defensive coordinator Robert Saleh has utilized the “Wide Nine” on early downs during his first two seasons in San Francisco.

Stop me if you’ve heard this before: After another disappointing season on the defensive side of the ball, the San Francisco 49ers are making significant changes to their defensive scheme this offseason. Many of these changes stem from new defensive line coach Kris Kocurek‘s preferred use of the “Wide Nine” which has quickly become the hottest — and perhaps least understood — football buzzword for football fans in the Bay Area.

If you don’t know what a “Wide Nine” defense is, you’re not alone. As opposed to a specific type of defense, “Wide Nine” simply refers to the wide-9 technique, or the far-outside alignment, of one or both of a team’s edge rushers.

When a defensive end or outside linebacker lines up in a standard 9-technique, he lines up across from the tight end’s outside shoulder. In the “Wide Nine,” the edge defender lines up wider than a normal 9-tech, outside of the tight end’s direct field of vision, and at an angle facing the quarterback. If there’s no tight end on the line of scrimmage, the EDGE lines up in a similar fashion with respect to the offensive tackle. This is also referred to as a “Ghost Nine” technique, and is utilized by many NFL defenses — including the 49ers — on obvious passing downs. However, during his time as the defensive line coach in Detroit and Miami, Kocurek used the technique in a wide variety of situations:

49ers and the Wide-9 on Early Downs

Throughout his two seasons as San Francisco’s defensive coordinator, Saleh has frequently used “Ghost Nine” defensive ends to attack the quarterback on passing downs. Saleh also utilizes “Ghost Nine” or “Wide Nine” edge rushers in many of his five-man fronts, but it is extremely uncommon for the 49ers to use wide-9 defensive ends in four-man fronts on early downs — but that is about to change in 2019. One of these rare situations is when an opposing offense lines up with 12 personnel in an Ace formation: 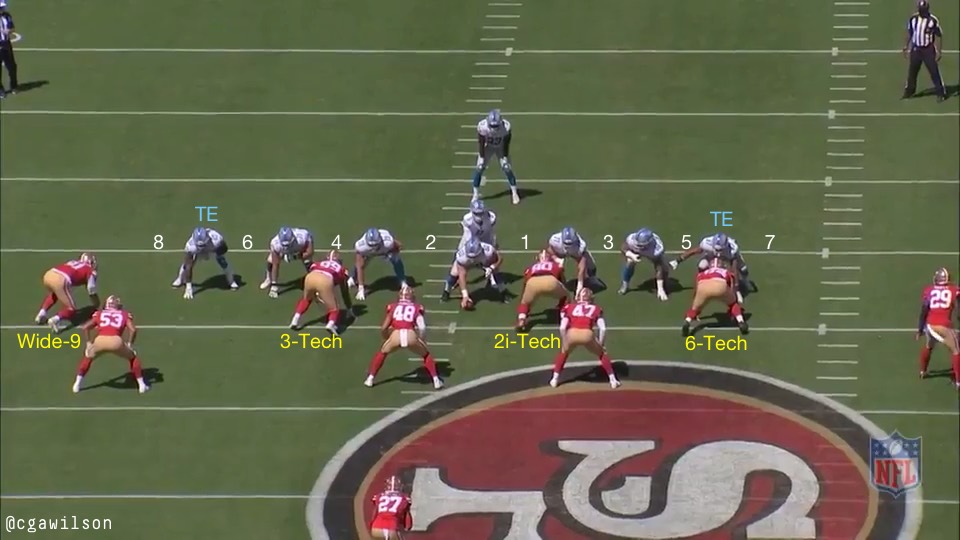 With two tight ends on the field, the Detroit Lions’ offense has eight holes along the offensive line for running back Kerryon Johnson to potentially attack, so the 49ers have eight gaps to fill. Defensive end Solomon Thomas lines up in a 6-technique to control the C-gap and to slow a potential release from now-49ers tight end Levine Toilolo, as strong safety Jaquiski Tartt drops down to handle the D-gap. On the opposite side, 49ers defensive end Arik Armstead lines up in a wide-9 across from Lions tight end Michael Roberts. This allows SAM linebacker Mark Nzeocha to slide inside into an improved position to fill the C-gap or pursue a run from the backside, while maintaining the ability to cover the slower Roberts if the Lions pass the football: 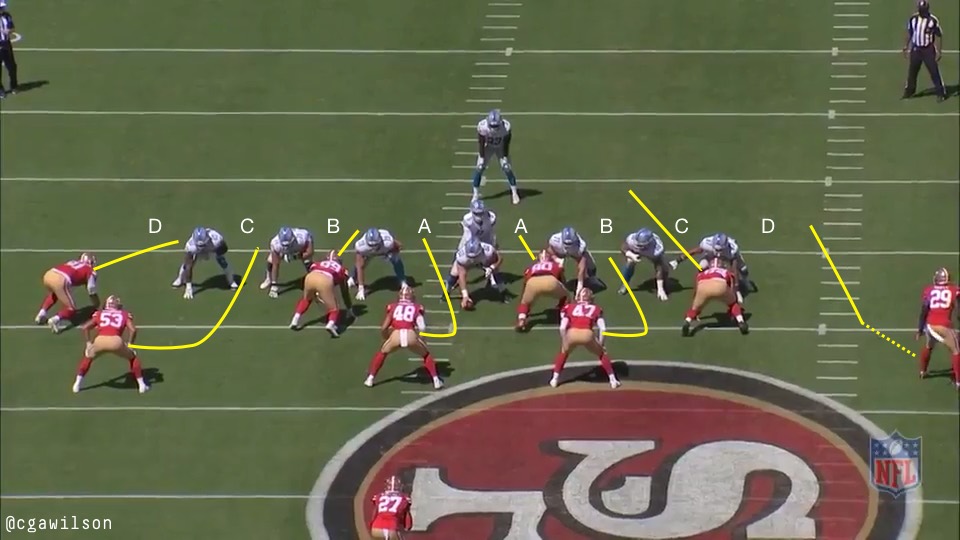 The Lions motion wide receiver Marvin Jones toward the formation as the ball is snapped on this inside zone run, but by the time the wideout can make contact with Tartt, Toilolo, who receives no assistance from right tackle Taylor Decker, is tossed to the side by Thomas. Thomas knifes in to make the play in the backfield but can’t bring down Johnson, who is quickly cleaned up by Nzeocha and fellow linebacker Fred Warner:

The 49ers have demonstrated the ability to stop the run while utilizing wide-9 defensive ends, as long as San Francisco has the proper numbers in the box. This should be no surprise, since the “Wide Nine” is far from a new defensive alignment. In fact, the wide-9 technique — originally called the 8-technique, like in the diagram below — can be found in old playbooks of the Miami Hurricanes, where the Miami 4-3 over defense was first developed:

The wide-9 technique certainly has its drawbacks, particularly in the running game. But before we address the negatives, we’ll discuss the advantages this wide alignment affords defenses in the passing game — particularly with the 49ers’ recent additions of edge rushers Nick Bosa and Dee Ford — as well as the bevy of changes Saleh will be forced to make to his defensive scheme as a result of Kocurek’s hiring. Check back tomorrow as we break down how an interior lineman — defensive tackle DeForest Buckner — could be the biggest beneficiary of the San Francisco 49ers’ new defensive alignment.

In the 49ers Film Room, we analyze San Francisco 49ers game film, including offensive and defensive concepts as well as specific player performance. We also break down upcoming opponents, dig into the film of potential free-agent fits, and analyze key trends from across the NFL:

After reviewing each of quarterback Jimmy Garoppolo’s passes during his tenure with the San Francisco 49ers, we selected Jimmy G’s top 5 plays, and then broke each one down for this edition of 49ers Film Room.

49ers Film Room: Breaksdown of the “Wide Nine” technique and its effect on the Niners' defense, plus how Nick Bosa and Dee Ford fit into the new scheme.

49ers Film Room: Why Kirk Cousins Is Not A Franchise Quarterback

In this 49ers Film Room series, Chris Wilson breaks down key stats and 38 plays which show why Kirk Cousins is not a franchise quarterback.

49ers Film Room: Cousins is not a franchise quarterback – Part 2

49ers Film Room: Cousins is not a franchise quarterback – Part 1